I tried to explain my views on art and alchemical sorcery in a long conversation with Yannick Franck, who visited me with a small film crew to make a documentary for his label channel Antibody. We talked about sound distortion, the metaphysics of matter, the forest as an occult force that melts animals, trees and plants into one living being, the need to redefine sorcery as a practice that encompasses the planet as a whole, and much more. I am very excited to see what will come of this.
Videographer: Camille Filleux
Sound engineer: Antoine Van Den Driessche
https://www.instagram.com/raum_antibodylabel/ 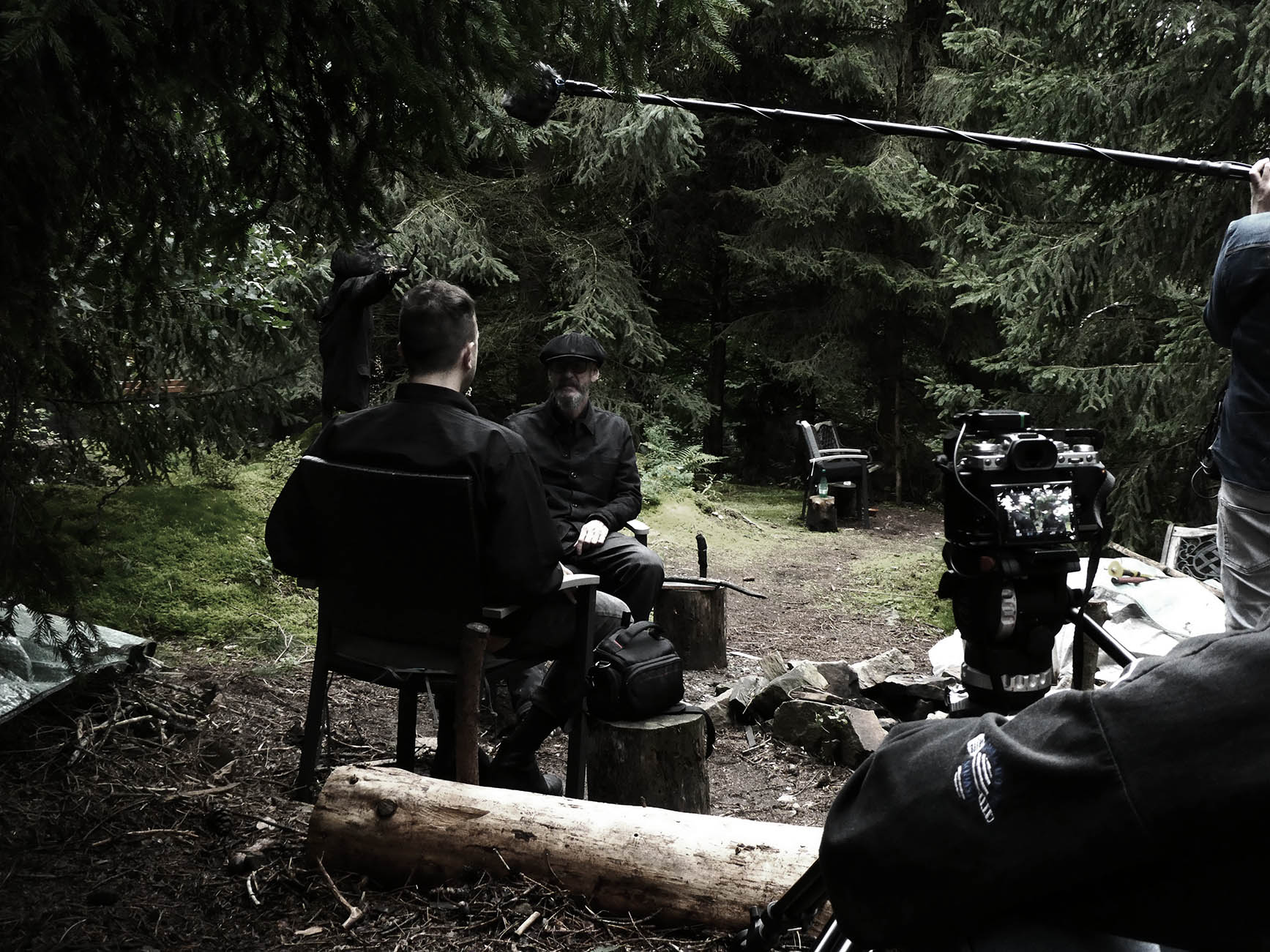 I’m excited to announce a new book in collaboration with Scarlet Imprint: https://scarletimprint.com/journal/anarchs-and-antichrists
Please be patient. The pandemic and Brexit are not making life any easier and there will be delays in publication.

Some basic reflections on the images included in this book.

Art is always autobiographical in one way or another. My subjective perspective has influenced all my work, from the intimate explorations of border zones in a security-obsessed world to the immersive video installations that juxtaposed postmodern urbanity with the forces of nature. Yet, never before has my work been so rooted in personal experience as in the following images, which I present under the title Anarch. It is impossible to talk about them without elaborating on how they came into being and what state I was in when I created them. What you will discover in this book is the result of three years of work aimed at connecting with the forest of the Ardennes as a living theatre, a theatre of cruelty, to use Artaud’s words. To get straight to the point: for some time now, I have been working from the perspective of someone who lives with constant pain. I have to find ways to deal with it and my focus is not on optimistic healing practices. We have to come to terms with the fact that not everything can be fixed. This is true on both an individual and a universal level. Our cultural narratives fail us when they treat pain and suffering only as phases that must be overcome.

If I can transform immaterial pain experiences into powerful objects and images that help me mirror human and planetary woundings, then I will have achieved my goal. It is important for me to point out that personal distress does not preclude a magical approach to life. Quite the opposite. The magic I am thinking of uses the satanic intensity of pain to direct the will to align with the realities of nature. Practices that use vulnerability as a means to conjure strength from deeply uncomfortable and unwanted conditions are not exactly welcome these days. Contemporary society reduces pain to a medical problem, and our anthropocentric perspective prevents us from seeing that all beings suffer and struggle to survive in the world. To say that pain is natural and universal, or worse, to listen to it and participate in it creatively, is one of the last taboos in occidental culture. It may have to do with the fact that the pretensions of human exceptionalism can no longer be sustained when we recognise that all life forms are interconnected in this way.

My work has always revolved around two poles: to make visible the connections between human and non-human agencies, and to develop sorcerous strategies that offer escapes to institutional appropriation and domestication. By distancing myself from urban centres of control and renouncing the lure of public recognition I have acquired new and effective ways of living and acting in the world. This is what makes sorcery so relevant, it projects me into an anarchic beyond where nothing is fixed. However, we should be careful not to fall for illusions of redemption. Sorcery will not save us, but it allows us to take matters into our own hands. My practice does not aim for an ideal future, but for creative survival in a chaotic world full of unease. I want my art to be like life itself: imperfect, messy, dirty and full of ambiguities and underlying violence. The questions that arise from such a position is whether there is any legitimate hope at all of not submitting to the art system as long as we are entangled in it. And whether creative resistance does not rather grow out of dark and shunned practices that thrive outside the circuits of visibility.

Just about everything I do today is site-specific and has the forest where I live as its centre. There is an old wooden shed here where I meditate every night and ritually engage with the surrounding woods. I have felt the black magic potential of this place since the first moment I saw it. A tree that fell during one of the many storms that have raged here in recent years is still leaning dangerously against the shack. Inside was an old power generator that the previous owner had placed there to keep it as far away from the house as possible because these machines were so damn noisy. Everything reeked of leaking fuel oil and the forest was littered with rusting industrial debris. I just loved this piece of wounded land from the beginning. Drawing strength from the contradiction of creation and destruction has always appealed to me and my appreciation for it goes way back. The landscapes of my youth were shaped by iron mining and industrial decline. Punk flyers and the posters of the Rote Armee Fraktion were among my earliest aesthetic influences. When I was in my late teens, I was torn between radical counter politics and the predatory animism of Castaneda’s early books. Quite a wild mixture really, but exciting youthful days for sure.

Over the last few years, I have transformed the shed into a sanctuary where I can become what I create and create what I have become. Some of the rites I perform there are inspired by the shamanic practice of transforming the suffering body into a sacrificial meal for demons, but most of the time I am engaged in activating the sculptural assemblages I build from materials I find in the forest. What goes on inside the figures is at least as important as their outward appearance. I work a lot with bark beetle larvae, which infest and kill spruce trees en masse in our region, and last year I filled soft sculptures with spruce pollen, which covered the ground with a yellow carpet for weeks. This is something that happens naturally every three or four years, but the trees also release it when they are exposed to drought stress or when they sense they are dying. There’s a name for it in German: Angstblüte, which translates as fear blossom. I also use digitalis, foxglove as it is called in English, along with soil from anthills and other substances that are better kept secret. Foxglove is very poisonous and can be fatal even in small quantities if ingested, but as always with pharmakonic plants, there is a strong dialectic involved. The figures draw their magical power from the organic materials that work inside them, but also from the natural forces that act on them from outside. Eventually they will release it back into the earth as they fall apart and decompose. Even after they have merged with the forest, the alchemical sorcery that animates these objects continues to play an active role in the cycle of decay and regeneration.

When you work in the forest all year round, you can’t help but sometimes be confronted with the violent destruction of life. This can either be due to natural causes or human transgressions. In our area, a lot revolves around hunting and we often hear gunshots, even at night. I found two wild boar carcasses that poachers had left in the forest to rot after cutting out what they thought was the best meat. For several days I saw buzzards feeding on them and I used their droppings to paint the white parts of the artwork. The main goal was not to please the eye, of course, but to absorb the magical power. The waste product left over from the conversion of energy from one powerful organism to another seemed to me to be particularly suitable for conjuring up transmutations. There was a lot of activity in the forest before the wild animals carried the body parts away and after a week, almost all traces of the kill had disappeared. The whole thing left me with the uncanny feeling of having come dangerously close to the forces of death, but such encounters always alternate with the emergence of new life in nature. At some point, a comprehensive sense of transience crystallises from the sum of these experiences, which I try to condense into visual form.

Because of my infirmities, I can’t move far from the place where I live, and when you stay in one place for a long time, a strange symbiosis sets in. The forest is increasingly taking possession of me, in more ways than one. I keep dreaming about it and the animals that inhabit it. That’s why they play such a big role in the book. Wild animals are sacred! No matter what type or size they are, they give us a glimpse into the true nature and meaning of life. I observe the activity of buzzards and red kites almost every day, and often at night I see spiders weaving their threads in such a way that their webs become an integral part of the installation that stretches across the entire shed. I take as much time as possible to study the lives they lead here in the dark and meditate on the patience they have in what they do. It gives me comfort to see that not all creatures are as restless as us humans. Sometimes I collect their silk to wrap around the figures and bind them, or to create sticky stellar glyphs. I have always been fascinated by the relationship between spiders and the universe. I am thinking here of Bataille’s article on the formless, in which he compares the universe to a spider and spit, but also of the magical relationship of the spider to the moon and lunar dew. It is interesting to note that the spider, like the moon, is associated with madness in French culture. And in Victor Hugo’s writings there are allusions linking the spider to the black sun. Fascinating material to draw inspiration from.

The black sun is a symbol of initiation that runs like a thread through the book. It gives form to that which defies understanding and can be related to the secret inner life of matter, but also to scientific mysteries of the universe such as the Great Attractor, star-devouring black holes, dark energy and so on. But of course, purely mythological or psychological interpretations are also possible. In any case, the black sun fires the imagination through the fusion of life and death principles. The book lives from contagion, one image infecting another. I invite the viewer to take plenty of time to explore the interaction of analogies and associations. There is a certain dream logic at play and I hope there is a musical quality to the work as well. If you look long enough and engage with it creatively, the images begin to act like notes in a composition. You start to hear the music when you bridge the gaps between the individual notes.