Black Phase – On May 22, 2011, Icelands most active volcano, Grimsvötn erupted full force, sending a cloud of ash 15 kilometers in the air. The eruption produced more ash in the first 24 hours than the entire forty day long Eyjafjallajökull eruption in 2010 which paralyzed air traffic and stranded travellers all over Europe. A first series of pictures was taken shortly after the eruption when a thick dust and ash layer covered large parts of Vatnajökull glacier.

White Phase – A second set of photographs was taken in May 2012, one year after the Grimsvötn outbreak. Winter snow, rain, intense wind and glacier storms eroded and partially purified the blackened matter. Some volcanic dust and ash also infiltrated the glacier. 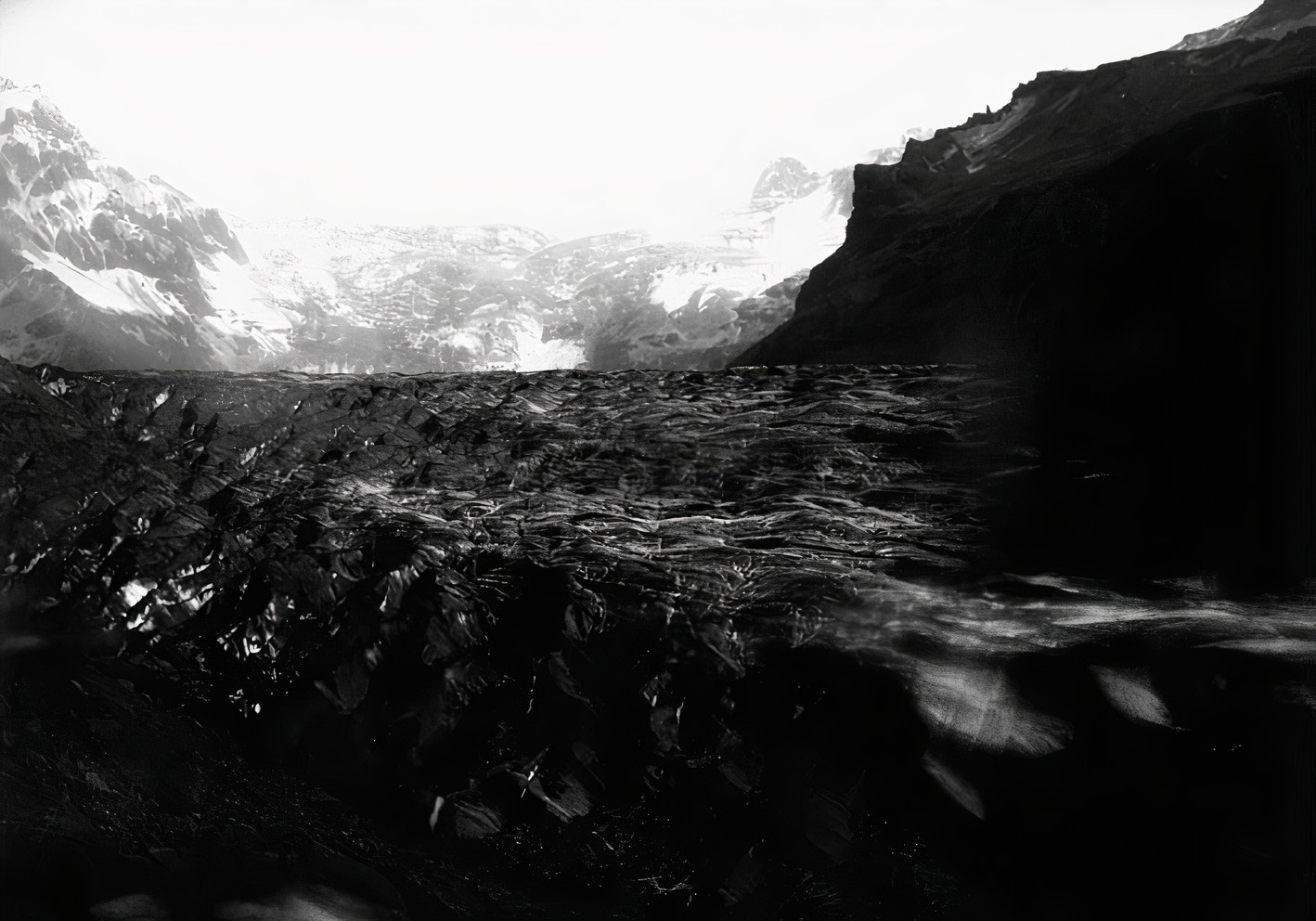 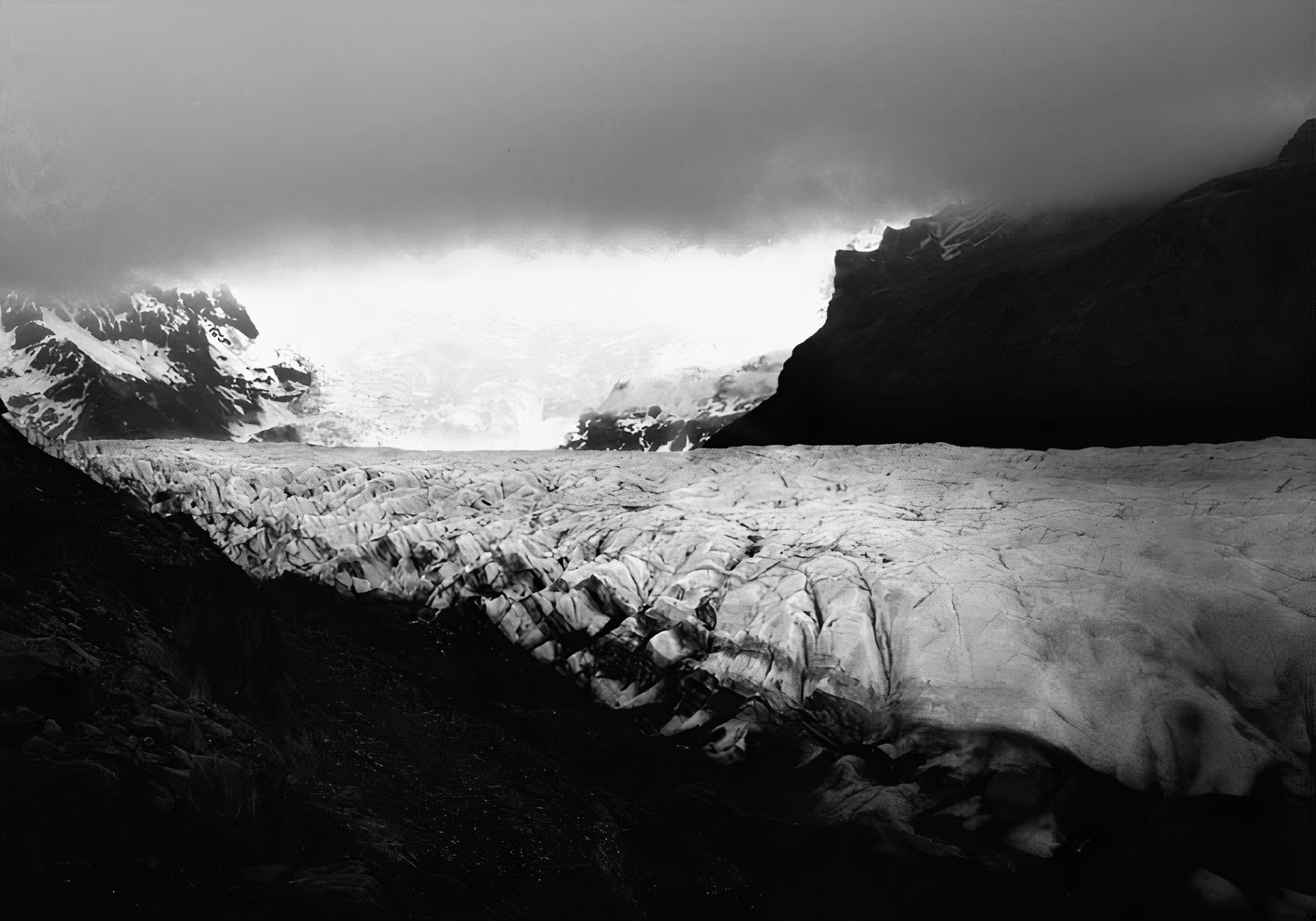 … according to the curators our work genuinely represents the agency of the unpredictable (and thus in a sense the unconscious) that may strongly influence our life and our political, economical and social realm.

Untimely Stories is an attempt to recognize the contemporary and upcoming situation of Europe through art. At a time when the social contracts and ideas that the European model had been based on are eroding, requiring new ideas for future, art may offer diagnoses and suppositions without making claims to being a solution to current problems. Politics of art (contrary to conventional politics) makes particular use of fiction in which it sees the function of truth. It creates stories which signals the truth of what is contemporary or upcoming.

According to Nietzsche, to act untimely is to act counter to our time and thereby act on our time and thus ‘for the benefit of a time to come’. Expanding upon Nietzsche’s theory, Giorgio Agamben identifies the untimely with the contemporary. According to him, who is truly contemporary goes beyond his or her time, beyond the present moment, beyond the pragmatic logics of punctuality. Those who inscribe themselves into the present perfectly are unable to see it. Only an active, often conflicting, attitude with one’s time makes it possible to recognise it properly and act accordingly – in agreement with subjectively perceived truth about time. The works presented at the exhibition are untimely in this sense. They become contemporary by means of going beyond their own moment in time. They are an act of opening to that which is to come and to the upcoming effects of our past.

Untimely Stories created by the artists present perspectives different from Europe’s currently dominant, integration-driven economism, in which the management of resources is construed in a highly limited way. They oppose it with a general economy (which also includes gift and hospitality economies, the politics of friendship, the critique of non-human reason, innovative ecology, non-systemic modes of survival and so on). They propose a reversal of present geopolitical relationships, determining dependencies between centres and peripheries. They confront the coming of communities which will go beyond current models of liberal democracy. They suggest an urgency of adaptation to that which is unforeseeable and yet unrecognised in the traditions of western European modernity. The exhibition does not provide solutions to be pragmatically applied or visions to be realised. Rather, it suggests ways in which we could think, see and feel in order to make a different kind of action possible. Europe should be thought, perceived and felt differently if it is to overcome current crisis. The exhibition is being prepared when as a civilisational model, political project, source of inspiration and inspiring myth, Europe is becoming a spectre. This especially applies to the European Union which was designed to become a fulfilment of this model or myth, and a practical application of the project. That is why ‘Europe’ ceases to be a notion associated with any system able to propose solutions for increasingly complex social, political, economic and cultural issues, becoming a synonym instead for a problem that possibly requires a solution itself. When all that was supposed to be solid melt into air, art confronts us with the spectre of what is to come, or what may come. The works created by artists translate various, often contradictory, ideas, views, preoccupations and attitudes as well as ideologies, myths and stereotypes into the language of art. The exhibition space will be a place for all of them to meet. Perhaps it will combine the singular voices into accounts that, rather than cancelling each other out, will resound together, forming a polyphonic narrative about Europe. It is an attempt to think of art as an artificial, fictional language for expressing the kinship of the dissimilar.

The photographs of both the black and the white phase reveal an unusual landscape. It turns out that the Earth is a planet that we do not know, or at least we do not know it entirely. Certain phenomena and the workings of some forces we’re simply unable to predict. The photographs depict this inconceivable force, mingling the aesthetics of beauty with the aesthetics of vastness. These photographs are a part of a greater whole featuring also films shot in Iceland and London. In a series entitled “A Planet”, the artists attempt to grasp instances, and the influence on social and individual life, of that which is unforseeable, incomprehensible, unrecognized. The explosion of a volcano is just one example of the intervention into the human order of unbriddled forces that undermine its political, economic and social foundations. We could say that the photographs of the black phase show this instance in full force. As for the photographs of the white phase, they present a force even more amazing which could be called the vitality of the inanimate. Bouschet and Hilbert refer also to P. Sharp (from the book Living Ice: Understanding Glaciers and Glaciation), who compares a glacier to a person able to adapt to changing conditions of the environment. Unpredictability and adaptation, the images created by the artists become metaphors of these two instances. Aren’t these, indeed, two dimensions of inevitability with which we must contend?

(Jaroslaw Lubiak and Joanna Sokolowska: from the exhibition catalogue) 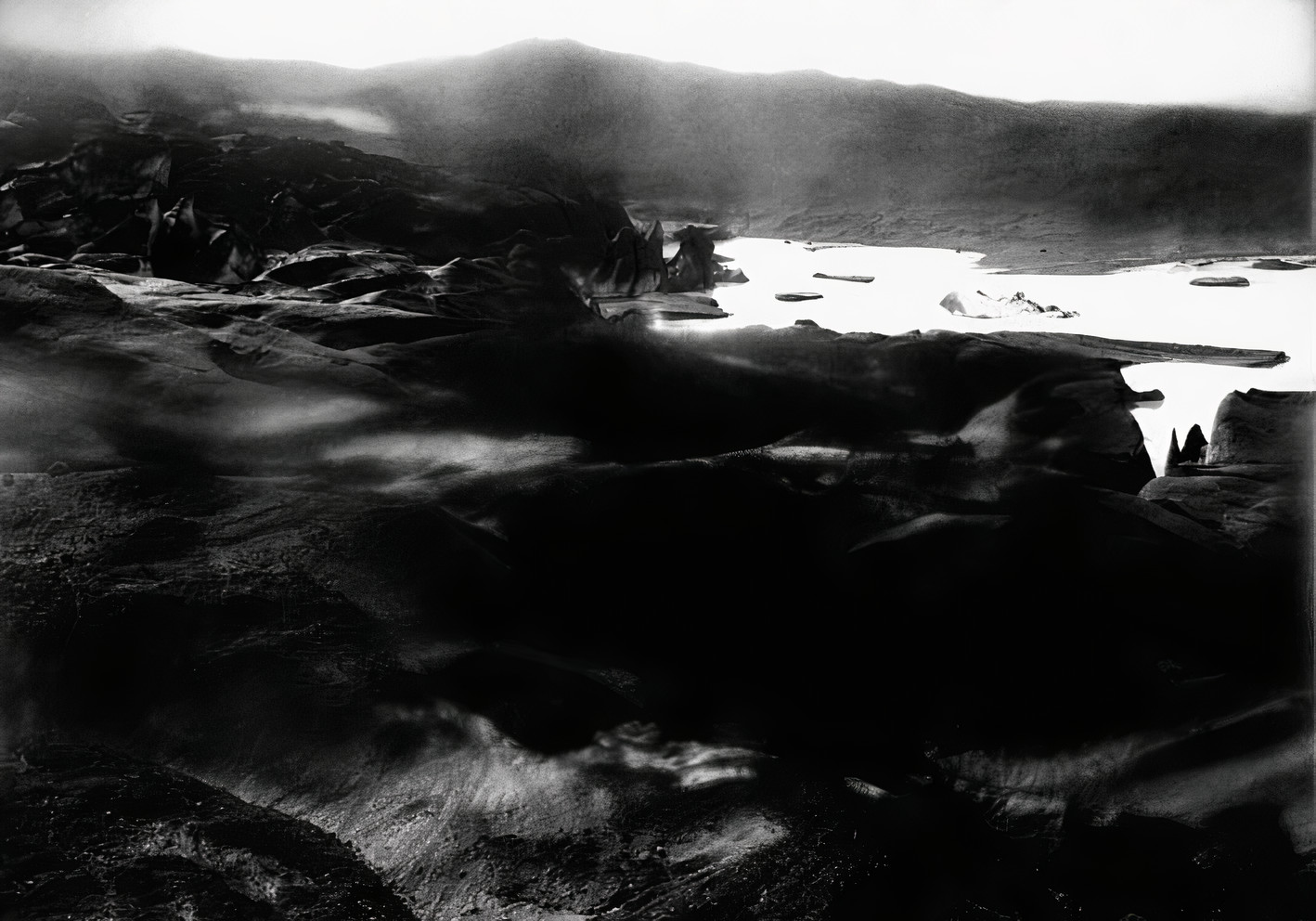 – Glaciers, so simple in chemical composition, are actually complex, vital entities. Far from being a passive chunk of ice, a glacier is a dynamic system, sensitive to its surroundings, and constantly changing to adapt to its environment. Glaciers are active creatures, delicately attuned to their environment. They can be brutally owerpowering, yet surprisingly sensitive to subtle influences when exercising their strength. – Robert P. Sharp, Living Ice, Understanding Glaciers and Glaciation 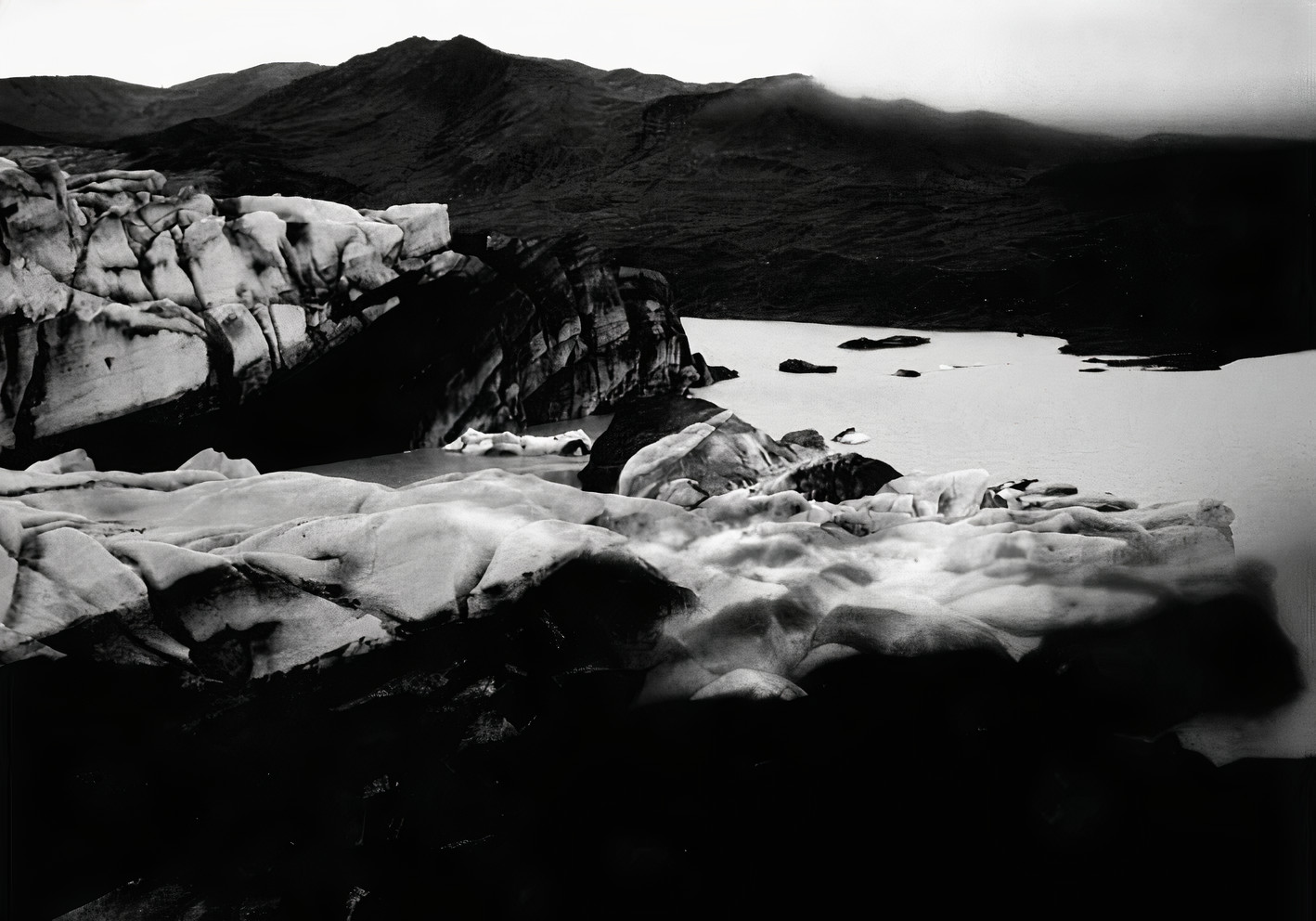 – The simple process of melting is influenced by a complex interplay among a host of factors, such as solar radiation, cloud cover, cloud thickness and density, reflected and emitted radiation, rain, vapour condensation, air temperature, heat conduction, gaseous convection, wind, humidity, reflecting power of the snow or ice surface (albedo), dust or dirt on the snow, and various dependent interrelationships between these and other factors. – Robert P. Sharp, Living Ice, Understanding Glaciers and Glaciation 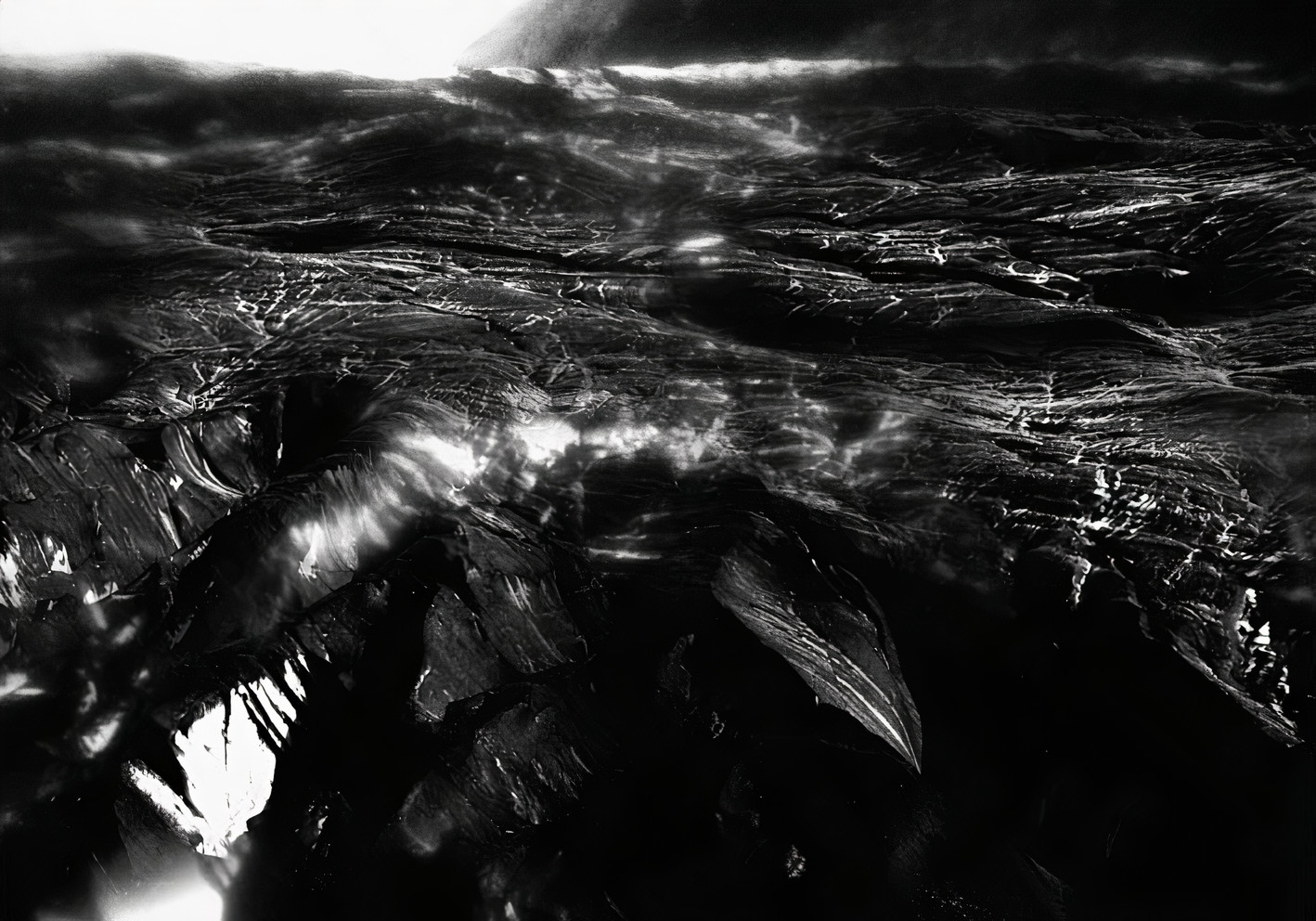 – There is a flow of information in the melting of the iceberg, as information thought to have been non-existent unveils itself, revealing something of the inner life of the iceberg, from its temperature to location, to history. Something of its past is always carried forward through the ages and while much of its expression may be noise to us, we can see through its lifecycle that it provides essential sustenance to bacteria, fish and birds. Beyond this we cannot say what networks this noise makes up, nor can we then conclude that the answer to such a question is nothing. There is more to things than our own relation to them reveal, and through superior empiricism we can perhaps arrive at a clearer understanding of the rich and complex inner lives of objects. – Michael Austin, Structure, Sense and Territory 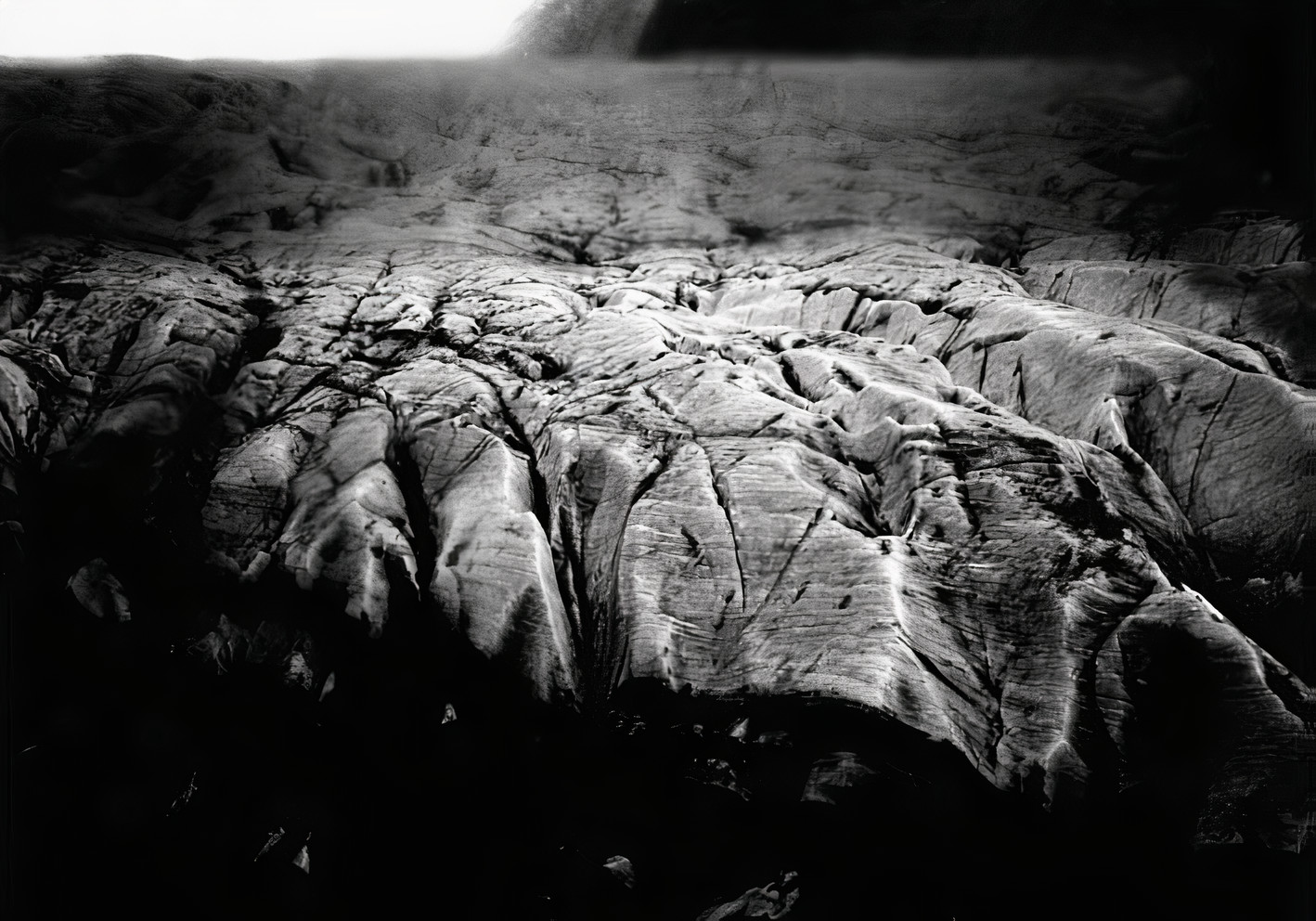 – Polar ices are thawing apace. Global warming is slowly dissolving them again into their primitive liquid states… If freezing and melting – two sides of the same coin, two hands of the same being – are signs of apocalypse, of an undifferentiated destruction from which new differences might one day arise, then ice suggests conclusions while water intimates introductions. Frost is the clarity of closure. Thaw is the vagueness of the portal. Ice is the end of winter overlapped by the meltage that begins the spring. Ice is still, though invisibly, moving. Water moves, yet stays in one place. Ice is tight though on the verge of loosening. Water flows but can again freeze. Ice is the axle. Water is the turning world. – Eric G. Wilson, The Spiritual History of Ice 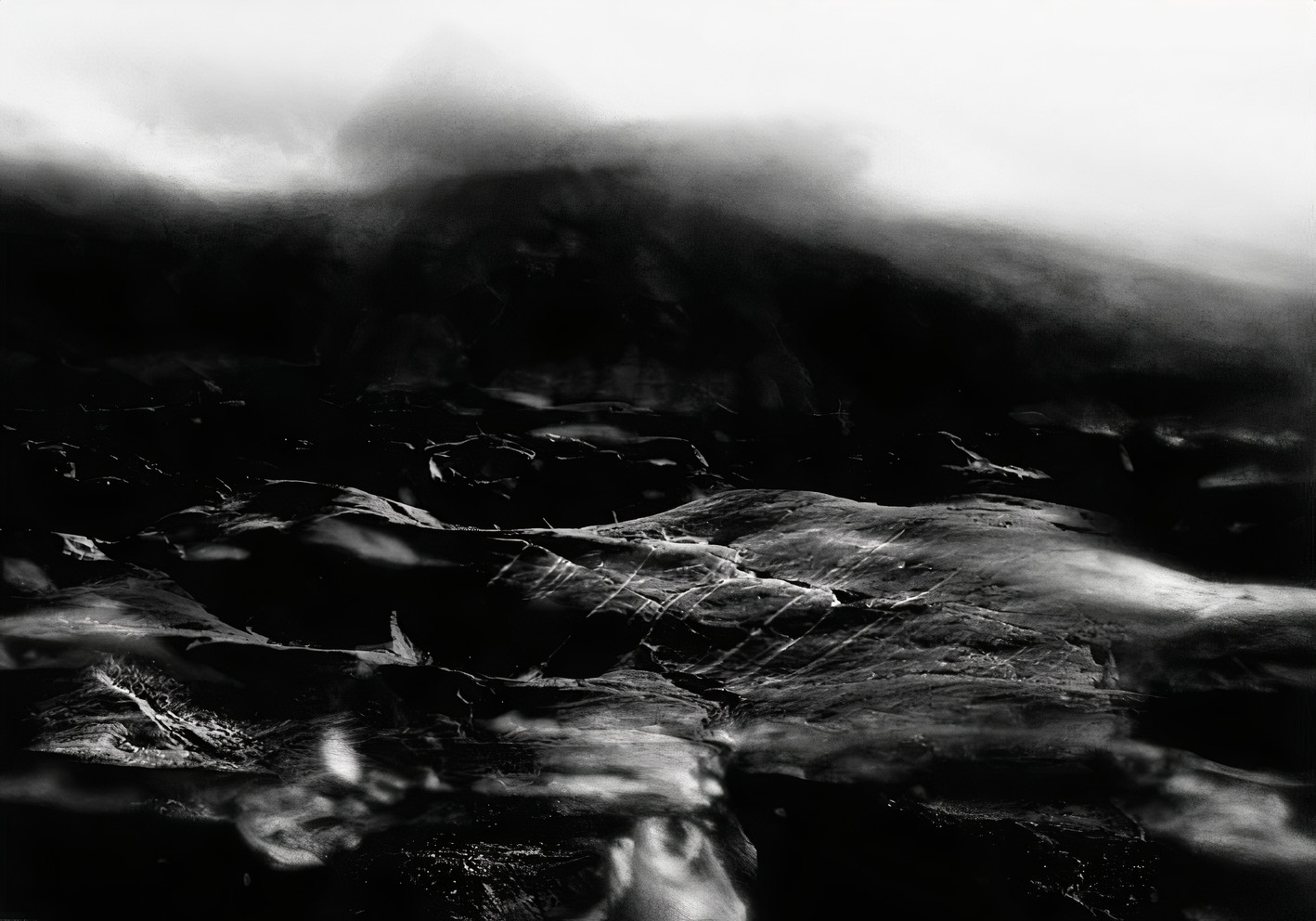 – In the canons of alchemy, Mercurius embodies circularity. As the spirit of life, he is present at each stage, both embodying the qualities of each level and acting as a catalyst to move the work to the next transformation. In the nigredo stage, Mercurius is the ouroboros or the caduceus, merging the opposites that he will separate as he moves the work to albedo. In the white stage, he is the white tears, rain, or dew that purifies the blackened matter. – Eric G. Wilson, The Spiritual History of Ice 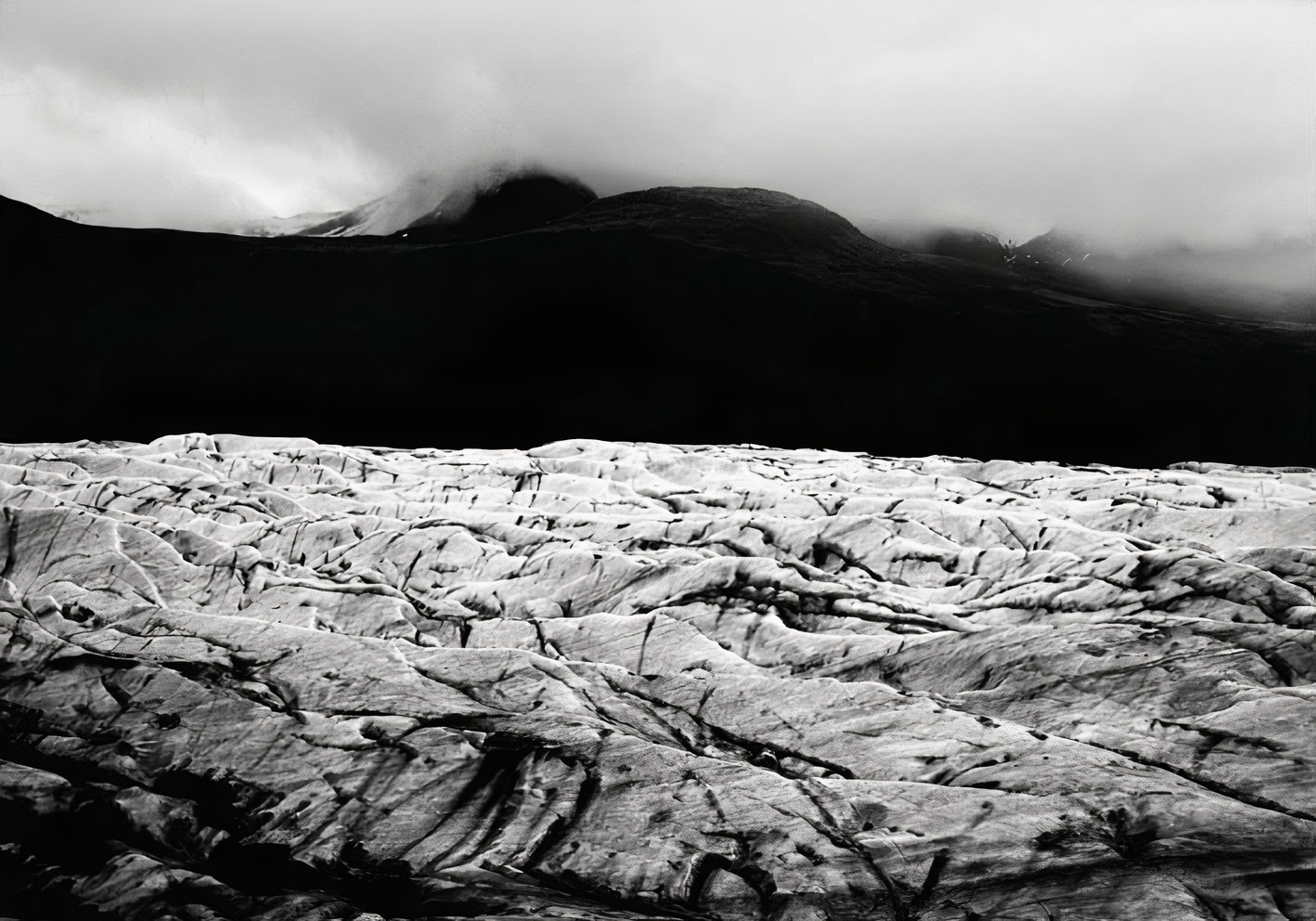 – The gnosis of ice is not a revelation of static truth, an unchanging clarity. An insight into the mystery of ice releases the adept into the ambiguous flows of life… To grasp the ice – as a revelation of the groundless ground is to find oneself unmmored, undone, distributed in the all, not attached to any particular thing. The ego melts, sinks back into the muck from which it arose. Yet, from this dissolution arise fresh resolutions: new patterns of being that are less egocentric and more open to the energies of other humans, animals and lands. This is the secret of the alchemical work, of the philosophical Mercury. As he freezes into the crystal stone he is already on his way to melting back into the prima materia, from which he will again rise into ice only once more to thaw. – Eric G. Wilson, The Spiritual History of Ice