ON CINEMATIC SORCERY AND PSYCHOGEOLOGICAL CONFLICTS

Vanessa Sinclair and Carl Abrahamsson invited me to give a talk at a conference held at Husets Biograf in Copenhagen, Denmark, 14-16 October 2022. As I am unable to travel, I participated via video recording.

My talk is entitled: “On Cinematic Sorcery and Psychogeological Conflicts”.
I illustrated it with the help of images from two video installations I created with my partner Nadine Hilbert and with the help of musicians Stephen O’Malley, Kevin Muhlen and Angelo Mangini and dancer and writer Alkistis Dimech.

The first two evenings were film-only screenings where I presented a video called “Satanic Earth”. This is a fifteen-minute variation of the material that formed the basis of our Metamorphic Earth exhibition and has never been shown in this form before. The music for the video is by Stephen O’Malley.

VISIONARY MEDIUM: Psychoanalysis and the Magic of Cinema

The Psychoanalysis, Art & the Occult series of events, curated by Dr. Vanessa Sinclair and Carl Abrahamsson, is dedicated to exploring the intersections and integration of psychoanalytic theory, the creative arts, occult practices and folk magic traditions. By inviting psychoanalysts, philosophers, artists, writers, filmmakers and magical practitioners from a variety of theoretical orientations and worldviews to discuss their work, personal experiences and areas of interest with one another, dialogue is opened up between practitioners in fields of study that traditionally rarely engage with one another, though often operate in similar and complementary ways.

A photo published in the French press on the occasion of the exhibition LA BEAUTÉ DU DIABLE at Frac Besançon juxtaposes our videos with Andres Serrano’s “Piss Satan”. The most diabolical juxtaposition on this page, however, is probably found in the strange echo of video background and photograms of burning petrol on light-sensitive paper. More than thirty years lie between these two bodies of works, and yet the materiality I work on still reveals to me new variations of moving and changing chaotic principles.

It may be helpful to point out on this occasion that the fundamental principle of what has become known in the global West as philosophical Satanism is to regard chaos as the eternally dynamic force from which everything emerges, including the illusion of order and stagnant perfection as the principle of the good and the desirable.
https://www.bouschet-hilbert.org/polyphonic-satan/ 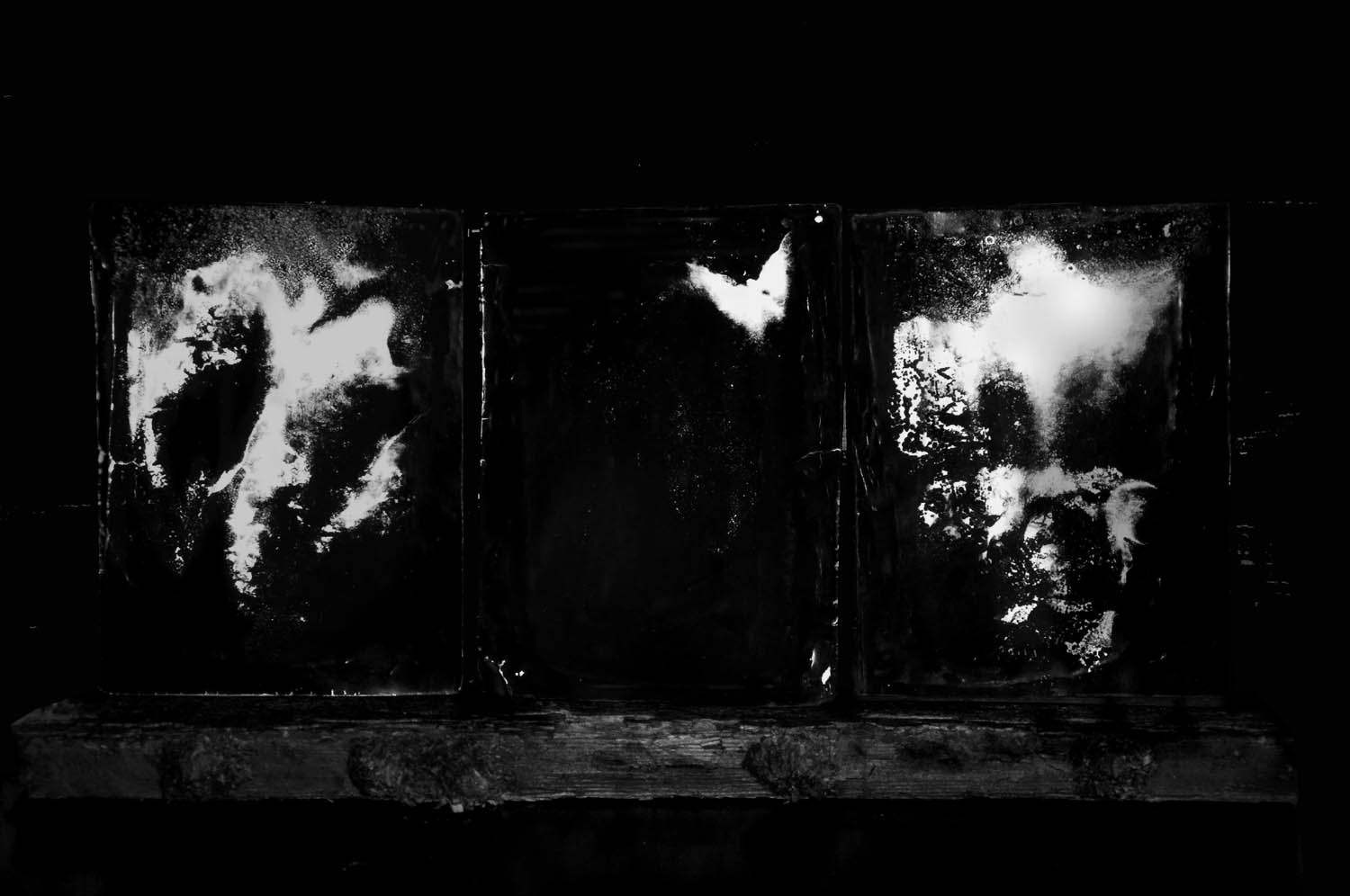 I am participating with a three-channel video installation in the exhibition “La Beauté du Diable” co-curated by Benjamin Bianciotto and Sylvie Zavatta for the Frac Franche-Comté in Besançon, France, from 15 October to 12 March 2023.

The installation focuses on the work I did in collaboration with the writer and dancer Alkistis Dimech.

Phosphorus
Phosphorus aims to explore what Alkistis Dimech calls “the dynamics of the occulted body” through a dance of darkness. And by darkness I mean the essence of chaos, which the alchemists call Satan. But “dance of darkness” is of course also the name that Tatsumi Hijikata gave to Ankoku Butoh, the transgressive art form that probably most influenced Alkistis in the elaboration of an intense choreography situated somewhere between sensual embodiments of inner landscapes and demonic transmutations. Through the expression of ambiguous beauty, the videos we present in the exhibition “La Beauté du Diable” merge satanic darkness with Luciferian light in a kind of alchemical wedding that gives birth to the Black Sun. The footage was recorded during two ritual dance performances that took place on the occasion of our exhibitions “Metamorphic Earth” and “Poison Oracle” and is set against the backdrop of images that we filmed during a total eclipse over the Arctic. The installation Phosphorus will premiere at Frac Franche-Comté.
– Gast Bouschet 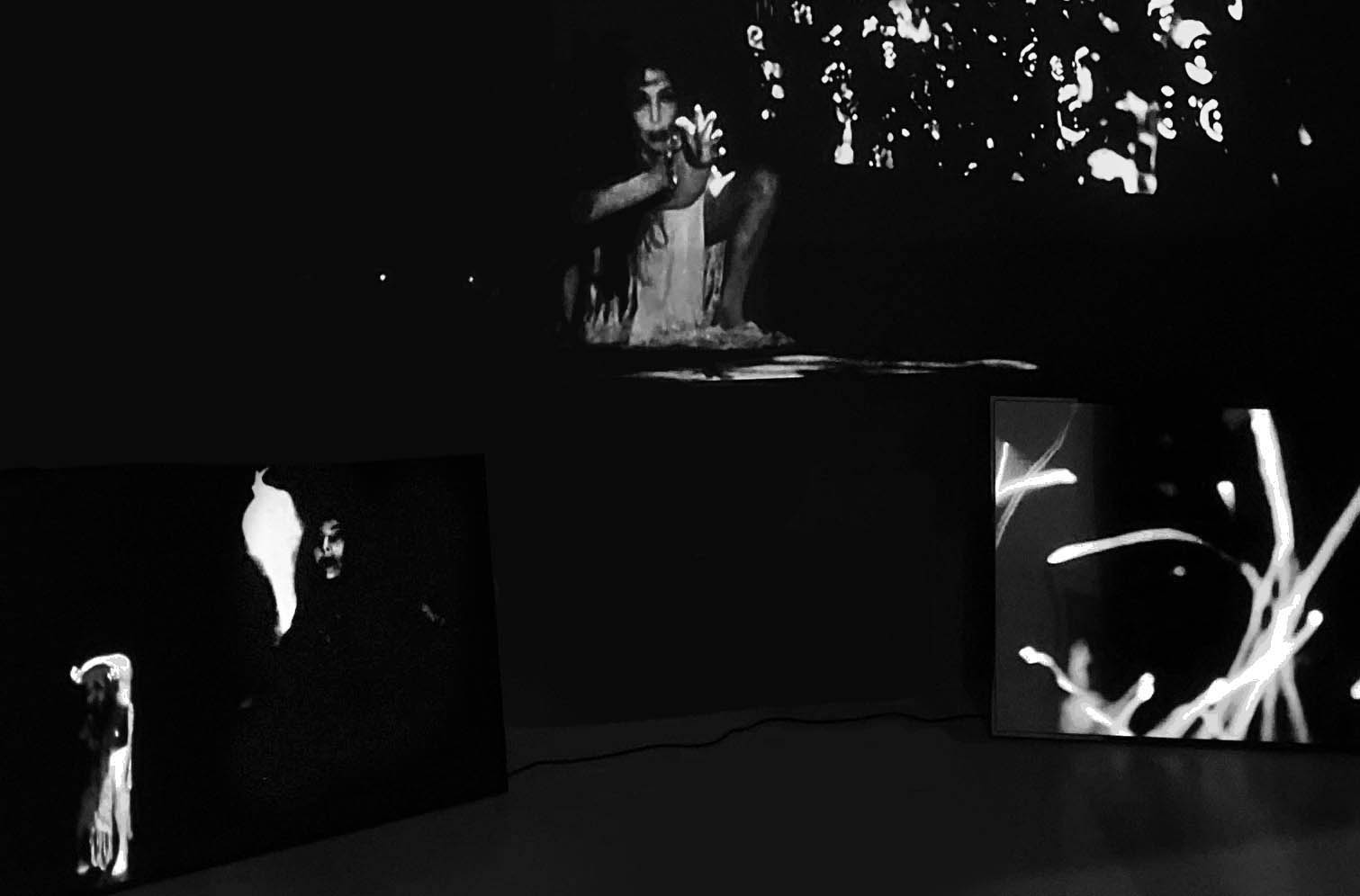 Since the 1980s, Gast Bouschet, alone or in the company of Nadine Hilbert, has built up a body of work that deconstructs and dismantles power structures: those that govern socio-economic domination; those that, illusorily, grant a central place to man on Earth. While he favours immersive video installations, photography, painting and even intervention in the heart of the forest appear as expressive forms with similar stakes. Through a long, immense and elaborate alchemical and sorcerous work, the Luxembourg artist pursues a reflection on the mutations and metamorphoses of matter and images, on the creative destruction that defies finitude. In this sense, the notion of movement is central to his artistic vision. The video installation Phosphorus (2017-2022) was created in close collaboration with Alkistis Dimech, a ‘sabbatical dancer’, practising Ankoku Butoh with a clear awareness of its enigmatic, radical and magical scope. Faced with this invasion of light and darkness, of radiant reds, we take part in a transmutation played out on different levels: that of the “occulted” body, of the primordial Earth, of the interconnection of the two going as far as fusion. Reunited in an alchemical process, the bodies change without altering, the demonic interiority reaches its freedom, chaotic and luminous, the movement introduced by the dance revives the Luciferian thought and the deep rituals. The eclipse symbolically offers this essential passage, just as the multiplication of the dancer’s body makes explicit the physical, geological and psychological upheavals at work. We then witness the rise of Phosphorus, the “Morning Star”, which joins Venus to Lucifer.
– Benjamin Bianciotto

Following on from the exhibition L’homme gris, presented at Casino Luxembourg by Benjamin Bianciotto, La Beauté du Diable proposes to explore the presence of Satan in contemporary art from the angle of his figuration and his metamorphoses. Beyond the representations explicitly referring to the Devil or his symbolism, the exhibition aims to question the aestheticization of Evil through works that transmute the “repulsive” into aesthetic pleasure. By questioning our certainties and confronting them with the structural resistance of Western societies, these works have an undeniable political dimension. They turn taste on its head: a transgressive alchemy of sorts. Taking their cue from Lucifer’s “non serviam” in a veritable song of revolt, the artists in turn refuse to allow themselves to be controlled by an authority considered unjust or arbitrary and to submit to fate. Lucifer is confused with Prometheus, and the ‘light-bearing’ angel bringing illumination and freedom to creators in a post-romantic and symbolist heritage. Through the double movement of unveiling the horrible (in the image of the Apocalypse, which means Revelation) and its revival in seductive garb, they seem to affirm their refusal of the pain and ugliness of the world. But the exhibition also questions the role and place of art in our current societies. Recent creation is perfectly aware that danger lurks beneath the attractive varnish; it too knows how to play on this ambiguity, disguising reality in order to better charm us, adorning itself with the trappings of capitalist and advertising perdition. Finally, The Devil’s Beauty will not evade the religious dimension, from the demonisation of contemporary art to its capacity to revive debate within secularised cultures. Ambivalent, polysemic and cathartic, the exhibition highlights the oxymoron contained in its very title, and assumes and defends this fascination with Faustian overtones.
– Press release for the exhibition.

Because of my disability, I can’t physically visit the exhibition, so I don’t get a sense of what the spaces feel like. On Frac’s social media pages https://www.instagram.com/fracfranchecomte/ their exhibitions always look kind of the same, more reminiscent of bright, tidy children’s rooms than haunting art installations. Which, in the case of an exhibition about Satan, who embodies dark chaotic forces, is basically an unacceptable trivialisation. But I have become accustomed to the fact that art loses its gravitas and abysmal menace when it is institutionally appropriated. We are currently experiencing a process in which art is being systematically defused. The question that not only I have to deal with is whether sorcerous artists should continue to exhibit in such times or withdraw from the exhibition circuit altogether. But is it still art if only those who make it see it? This is not a retorical question. I also don’t want to hide that while I no longer believe that the art system can be changed from within, I do want to do justice to the fact that the very essence of sorcery is to draw strength from adversity, confrontation and confusion. I would be very interested to read what you think about this. You can share your ideas with me here: linkingwithdemons@gmail.com
– Gast Bouschet 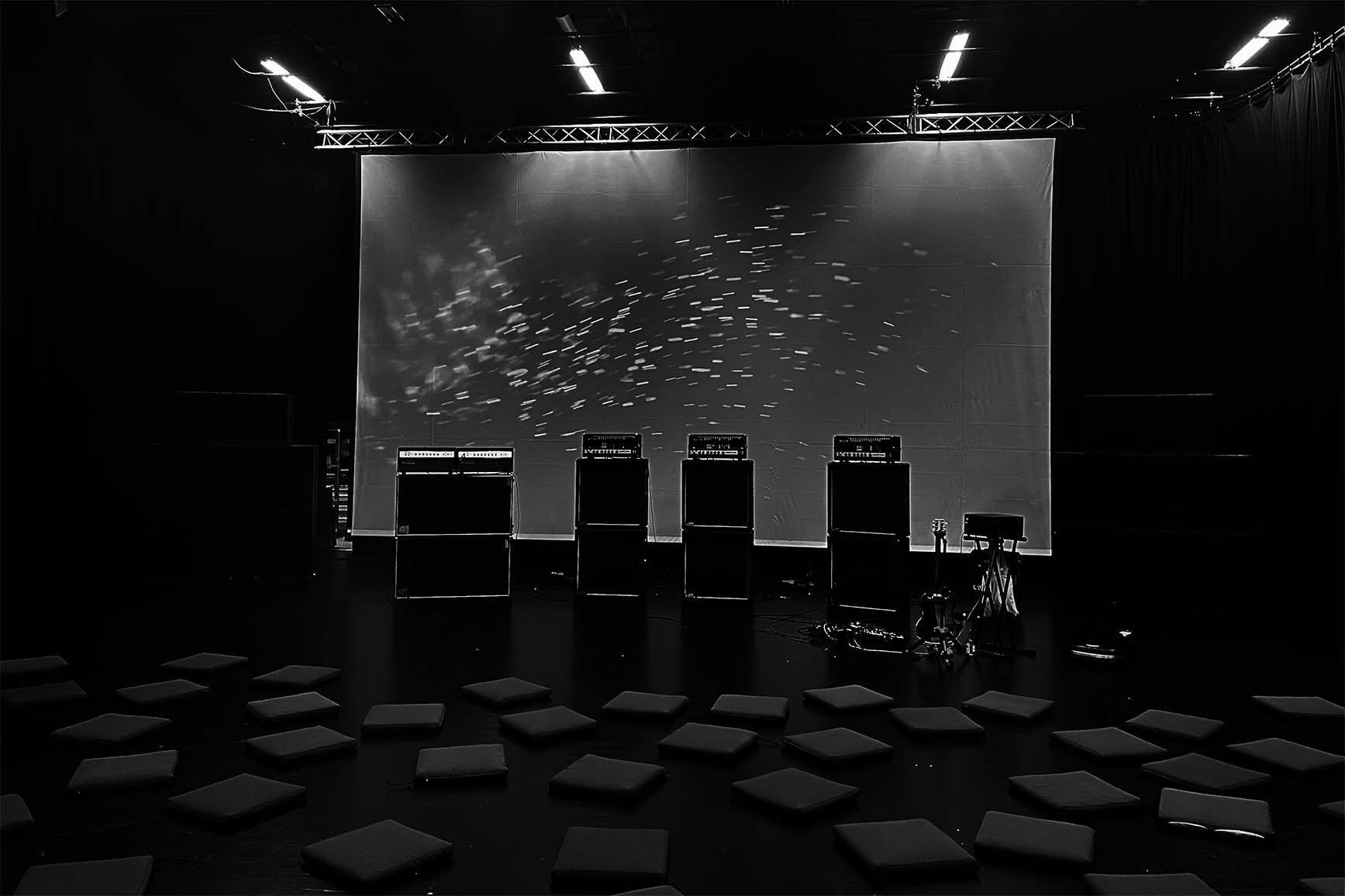 Stephen O’Malley played a raw, mindbending gig at Inkonst in Malmö, Sweden on Saturday 22 October, showing our video The Ecstasy of Dust with a 10,000 lumen projector. Here is a picture of the set-up, taken during the sound check before the show.

The video is a testimony to “the choreographic beauty of the movement of a swirling dust stream”, as Stephen describes it in his introductory text to our forthcoming book Anarch. This is what it looked and sounded like a few years ago at Chapelle Les Brigittines. The video he showed in Malmö was projected on water vapour in Brussels at the time.